No Afghanistan in Ukraine, No to Wars!

Salaam, Friends — I would like to introduce a new series of interviews I am doing with each of the Afghan Peace Volunteers, by sharing an article just published by Dr. Hakim, their founder and adviser. I believe the article, and the interview he includes, shows the substantial impact the US presence has had on the lives of families here. Despite the US investment of more than $100 Billion dollars in non-military aide since 2001, the corruption is so rampant that the ordinary citizens live in virtual poverty.  I seek your replies to the compelling message that guides me from the Nuremberg Principles that if I see an atrocity and do nothing, I am complicit.  I invite all of us to question what we can do together to reverse this situation…..

We’re human fodder caught in the crossfire of armed groups and armed governments
“No to wars!” By Dr Hakim August 12, 2014

“Her father was killed in Helmand amidst fighting between the Taliban and theAfghan/US-NATO forces,” said a relative about Gul Jumma, who looked down, shy and full of angst, sensing a future that’s not promising. Gul Jumma, together with the Afghan Peace Volunteers, expressed their opposition to wars in this video. Gul Jumma holds up the sign for ‘Ukraine’, indicating ‘No to wars in Ukraine’. She understands what it is like to be caught in the crossfire, as happened to her father when he was killed in battle. END_OF_DOCUMENT_TOKEN_TO_BE_REPLACED 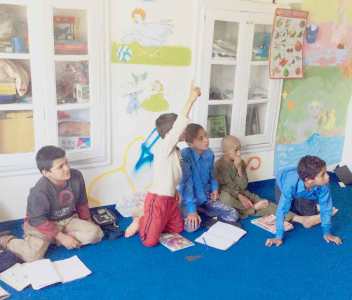 I am dressed for “going out.” Norms for modesty require that women’s heads and necks be covered at all times, that tunics ideally go to the knees, and that a skirt or loose fitting pants be to the ankles. Socks are preferred, but sandals are acceptable. The women are teaching me to tie my scarves for maximum modesty, and ensure that my clothing is appropriate. Only two of my tunics are long enough, and I contrast these standards with the short shorts and skimpy tops so prevalent for young girls in the US during these hot summer months! However, I do know that this style is very comfortable for sitting cross-legged on the floor at the Center!

I was delighted to sit in on a class for street kids who are learning to write Dari (their language) and to do simple math. The more than twenty students are attentive, engaged, and actively participating, even though it is late on a hot afternoon. Read more…

Posted on Veterans For Peace
by Sherri Maurin
August 13, 2014
Living in Kabul

As I write a huge explosion startles us; it is hard to tell how close it is, and many of our community are out taking exams at the University or working at the Borderfree Center. We scramble to begin calling them, and go online to find out details. Twitter feeds tell us that a suicide bomber has targeted a foreign force convoy several districts away; four civilians were killed and seven injured (read Washington Post story). This is the reality of life in Afghanistan where an estimated 42 children are killed each week. Sometimes the explosions are “sticky bombs” stuck to the bottom of a car, and other times they are small Improvised Explosive Devices‘ (IED.) Fortunately, for today, we are all safe.

Afghan Peace Volunteers
Yesterday and today have been spent with the Afghan Peace Volunteers  (APV.) We have talked often during the monthly Global Days of Listening, and they share their struggles and hopes to build a new reality, grounded in nonviolence. Community life is not easy for them; the majority of their lives have been lived under fear from the US’s longest running war, and they have grown up distrusting other ethnic groups and Internationals, especially Americans. Their willingness to reach out to other ethnic groups, and to us, and to try and overcome a lifetime of enmity, continues to amaze me. END_OF_DOCUMENT_TOKEN_TO_BE_REPLACED

Posted on Veterans For Peace
by Sherri Maurin
August 12, 2014
Fridays, in the Muslim world,
are days of relative rest and the gathering of family and friends.

We decided to go on a picnic, and twelve of us crammed into a van to head for a peaceful area about an hour outside Kabul’s downtown center. Those of you who have experienced traffic in Cairo can get a small sense of how challenging it is to cross Kabul. There are no lanes, no signals, and no rules; there are hundreds of potholes and honking horns. However, the Afghan Peace Volunteers (APV) are young and we cross town, bobbing and weaving and honking our way through traffic, clapping and singing with music blaring from our radio.

The land is bone dry clay, hard as rock, and I couldn’t visualize a park, but we wove higher into the hills, following dozens of others trying to escape the incessant heat, to an area that was cooler with more trees and a bit of grass. END_OF_DOCUMENT_TOKEN_TO_BE_REPLACED

Posted on  Veterans For Peace SF
by Sherri Maurin
August 12, 2014
Salam from Kabul!
Peace To You From Afghanistan! 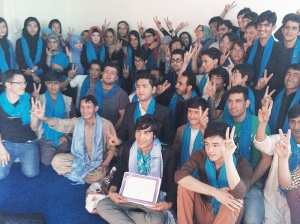 I arrived at 10am on Thursday morning, to sweltering heat and heavy lines. Smiling, yet shy children, peaking out from behind mother’s scarves, made the long wait at Customs easier, but once I was released into the scorching heat of Kabul, my all black clothing, including a head scarf, seemed like a bad choice!

The entrance was virtually empty except for the armed guard off at a distance. No one is allowed close to the airport, so the search to find my waiting friends, when all of the numbers I had weren’t working, was a challenge! They were there, but without internet or phone access we never connected, and instead I was given a ride by an Al Jazeera reporter just returning to Afghanistan to cover John Kerry’s arrival. END_OF_DOCUMENT_TOKEN_TO_BE_REPLACED